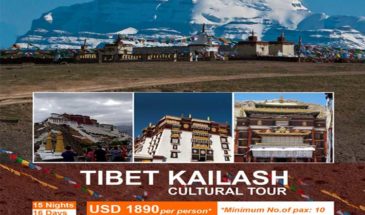 TIbet Kailash Cultural Tour is designed by Tour Experts to bring you to the most popular sites of Nepal including Potala Palance and holy mountain Kailash.

TIbet Kailash Cultural Tour is designed by Tour Experts to bring you to the most popular sites of Tibet including Potala Palance and holy mountain Kailash. Mount Kailash is holiest place for Buddhist, Hindu, Jain and Bon believers where thousands of thousands of people visit every year. Mansarovar Lake is very beautiful lake located in Tibet, China. According to the Hindu Mythology, Hindu’s deity Shiva lives on the peak of Mt. Kailash, Where he stays for contemplation with his wife Parvati, and daughter of Himalaya. This is the most sacred place and the final destination of soul and religious hub of the world. Similar to Kailash, Manosarovar Lake is the symbol of clarity and Purity. It is considered as the sacred place of pilgrimage, which attracts Hindus people from all corners of the world. Those who take a bath in this sacred lake and drinks the water of it is assumed to rinse out all sins. The natural and magnificent beauty of these sacred religious spots is really exciting and instills in people the sensation of being with Lord Shiva. Every year in May to June, Saga Dawa Festival happens. Saga Dawa Festival is one of the most important Festivals in Tibet which is mainly dedicated to Mount Kailash.  According to the Buddhist literary sources, Saga Dawa festival is celebrated to highlight the day when Sakyamuni (Buddha) attained the enlightenment.

Drive: Samye-Ganden, visit around and back to Lhasa

Drive: Kyirung-Border and drive to Kathmandu